We stocked up on food in "the Sault" (note that "Sault" is pronounced "soo") - which is your last chance to be sensible and cut through Michigan - and began the long drive around the top of Lake Superior, the third Great Lake I'm checking out on this trip. I've been along this road once, heading in the opposite direction in the summer of 2003.

The scenery is very . . . wildernessy. Canadian Shield for a long, long way. Rock, trees, lakes. And today rainy in the afternoon, foggy in the evening. We did get some great sunset views at the tops of crests towards the end of the night, though.

For those of you interested in pictures, Bri's done one better: we have his video camera set up to take a shot every 2 seconds. This is a further deterrant for us in terms of border crossings, but it makes for a cool movie when you play it back at many frames per second. We've decided against any sort of audio recording as the language in the car tends to be a bit salty.

We're stopped near Nipigon (which is sort of near Thuunder Bay) for the night.

Our drive west began at 4am this morning (on account of the ferry schedule).

If you want to avoid Sudbury and its famous nickel next time you drive west from Toronto or environs, you can cross Lake Huron on a ferry (from Tobermory to South Baymouth). The trip is 2 hours and is not unlike the BC Ferries trip from Vancouver to the island, though the water is a lot calmer and you're in no danger of seeing any whales. Huron is still big enough that you can't see the shore at all once you're out in the middle.

Then it's not too far to Espanola, where they seem to make a lot of paper, and you can turn left onto a Trans-Canada highway (Ontario seems to have 2) and head for Sault Ste. Marie.

My plans for a review of last year have been interrupted by the beginning of wedding season.

I'm currently in Ontario, flew in Thursday, and managed a couple of beers with antiflux's own Evan. I was going guarator his passport, but the pub distracted us for too long.

The real purpose of my trip, however, was my cousin's wedding this past weekend in Kingston. It was a delightful event - I was again struck by how people manage to really make a wedding their own.

Yesterday, I spent much of the day in Toronto, probably the most time I've spent walking around there. I ate in Chinatown (the restaurant was playing an okay screener of MI:3 on the tv) and then caught up to my sister in the Beaches area down near the lake. These are places I didn't really know existed until this week.

Maybe it's because I'm a Westerner, I don't know, but I am always struck when I visit this province by how much brick has been used in buildings. It's everywhere - shops, homes, skinny little apartment buildings, all over the place.

Speaking of the West, Bri and I are driving there starting later today. There's a Great Lakes ferry involved that I'll talk about more later.

On one of the counters in my bathroom, I have one of those peel-away calendars with a daily saying from the Dalai Lama. I started it in January, 2005 and I was peeling away dutifully for a few months. The current date showing is May 17, so it is exactly one year since I stopped.

I have come to think of that as the time that "the wheels came off" in terms of routine and scheduling. It's not clear to me that things have eased off too much, or at least not until this summer.

I've posted approximately three times in this space since then. Fortunately, I've had a chance to catch up at some point with all the people I envision as readers, but I thought it might be nice to outline what I have been up to, after all. 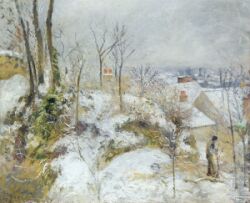