Found written on a bathroom stall:

What if the hokey-pokey really is what it's all about?

Posted at 12:26 PM
Comments
liked them before they sold out?

I got a couple links to this last week, and since I am such a fan, figured I'd report on the this little fiasco:

Creed sued for crappy performance (from Rolling Stone, thanks Michal).

A more behind the scenes look at same, from the Smoking Gun (thanks Beth). 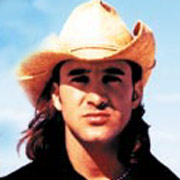 Tough luck, cowboy.
(YOU ARE NOT A COWBOY!)
(But you are probably A BETTER COWBOY THAN YOU ARE A MUSICIAN!)
(Though cowboys can get drunk and still do their job.)
(Some cowboys.)

Has anyone seen that show Clone High? If you've got Teletoon, I'd recommend it. The premise is that a secret government organization has cloned all of these famous historical figures to make an unstoppable clone army. The series finds these clones as teens, playing out classic high school dramas (tongue in cheek, though) under the watchful eye of their mad-scientist principal and his sweater-vest-wearing Mr. Butlertron robot butler.

Posted at 01:01 AM
Comments
dust off those boots

With the recent surge in warm weather (again; it is supposed to be spring, after all), the thoughts of young men have turned to soccer. It's time to lace up those boots and shove some kids.

After a decent showing by Sybian Athletico in Division 4 indoor soccer (top half, baby), our team is heading back outside with our sights set on the Division 2 crown, this time as Sybian 1860. There are still two divisions above us (Premier and Div 1), but they have linemen, making three referees instead of just one, which does not favour our exciting style of play.

I will be co-managing the team, handling the exciting administrative end of things while my colleague will be covering the coaching responsibilities. If you're going to be in Saskatoon (ha), make sure to come check out one of our games. If nothing else, we'll make some jokes and probably yell at the ref.

war, it saddens me that it has to be cold out for you to maintain your thoughts of young men.

i think what he's trying to say is, when it's cold out he _thinks_ of young men, but when it's warm out he doesn't have to because he will be covered with a seething mass of them, all naked and playing "soccer".

One Easter weekend activity I haven't done for a long time but is the tradition at my aunt and uncle's is to decorate eggs. If you haven't done this before, basically you hard boil a bunch of eggs and buy these dye kits with various colours. Mix the dye with water and vinegar, then you can leave eggs in the mixture to make all sorts of colours. Drawing on them in crayon prevents dye from reaching the egg because of the wax, so you can add patterns or what have you. When all the eggs are done you polish them with a little butter to shine them up.

I'll try to get ahold of a picture of the finished product.

Then of course you eat the eggs over the next week, preferably with some salt.

what happened to poking them with a pin and blowing out the eggy innards?

some of us prefer to suck our eggs.

Well yeah, you can't blow your egg and eat it too.

For those heathens among you (and I mean people who don't even get Good Friday off), here's your reminder that it's Easter this weekend. Of cousre, you're probably not reading this if you're at work anyway, right?

I am heading off to Montmartre, Saskatchewan (just South East of Regina taking #1) to visit family. As an added bonus, my parents will be around as they are bringing in this year's batch of emu chicks to be rasied in North Battleford. I just spoke to them on the phone; they're probably speeding through Edmonton right now. When I expressed surprised at their new ETA (about two hours earlier than I expected), my mother informed me that "the truck will go 140, you know." I suppose a responsible child would lecture them at some point, but what are you gonna do?

Anyhow, the new plan is that I'll ride down with them once they get here and grab a bus back from Regina to Saskatoon. This is a bus I've taken before . . . it pulls over during the trip, in I think Chamberlain, where I bought this kid smokes once during the pit stop. I guess I was in a weird mood because that's the only time I've pulled for anyone like that, but also one of the few times I've been asked.

I initially misread that as "emo chicks" and it took a triple take for me to figure out what the hell your parents were up to. I mean from what I've heard from you they've always sounded like cool people, but raising emo chicks? that's marketing savvy bordering on genius.

i've been to helena *and* bismarck.

i agree with this "r." your parents are in the wrong business. mail-order emo brides! genius!

In the interests of having news in all categories, I thought I might mention that I finally got around to giving Pearl Jam's Riot Act a good listen, and it's been getting a lot of time in my car. It's got that whimisical thing going for it that we've come to expect from them in the last several years, but they also still rock out . . .

Posted at 01:58 PM
Comments
our discontent

Just when you thought it was safe to switch from winter to summer tires . . . it had started by 11pm last night. It's been snowing since then. Looks like we'll have to cancel tomorrow's soccer practice . . .

Posted at 06:12 PM
Comments
no progress has been made

So Randy has not updated his address record with SGI. Tsk tsk. I guess it's time to sic a professinal locator on him. Hopefully something turns up. Unfortunately (and ironically), this professional locator guy has had trouble getting back to me. I should maybe take that as a sign.

Posted at 12:11 PM
Comments
progress has been made

The new schedule for my thesis, which I haven't mentioned in a while, is to finish it by the end of the month and defend in May. This will hopefully fit into my summer work schedule (details of the job to follow, but it will include driving in a two-vehicle convoy to Halifax in July).

I am also hoping to produce an article for publication with my supervisor by the end of May. It's a bit weird to think of being published, but it's less intimidating now that I've read a number of articles. Plus, it comes with the territory . . .

Posted at 10:45 AM
Comments
don't pull a Gordon

It not often that I get some joint BC-Saskatchewan news, but I heard about this last week. The University of Saskatchewan Students Union (USSU) made up these posters

featuring BC Premier Gordon Campbell (Louis' is the campus pub run by the USSU).

You may be interested in some of the ensuing political fallout. The premier himself was pretty cool about it, though, saying that if it helps stop drinking and driving then it's ok with him.

Posted at 11:00 AM
Comments
Dirrtydrive

This weekend, we sample the local scene once again. Tonight's destination: Overdrive, arguably one of the most popular bars in Saskatoon.

To get you somewhat of a picture of the clientele, I have this buddy who's . . . well, let's say made it comfortably past first base on the dance floor there. On a more recent outing, he made a new lady friend, and they hit it off so well that they headed back to her place for some quiet time. They were "getting intimate" to the point where it was time to track down a condom. She went to her secret stash and after a brief serach exclaimed "Hey, new box!" at which point (though the haze of booze and what is probably some form of SARS we've been getting here) my friend draws a mental line and puts a cap on the evening's activities.

Perhaps they should call it Overrdrive.

But apparently if you kiss a girl on the dance floor, your bound to life with her and if you are seen talking to another girl she gets mad and leaves. Girls never cease to amaze me....

Well, to answer yesterday's question, they don't get too mad at you if you have to cancel a court date. I suppose this sort of thing happens a lot.

Next week, I will return to SGI (whom I still blame for this silly situation) and try to extract a new address for our favourite defendant. Will the information be there? Will anyone talk to me? Stay tuned . . .

this is a one time thing as to not ruin this site but...Warren is Gay :)

So just when we thought we had him, Randy Soze is nowhere to be found. I'm a bit disappointed in the bailiff service I used, because they waited until the last day the summons could be served to inform me that they our elusive friend no longer lives at the address I gave them.

Tomorrow, I will find out both what options a person has in tracking down another person, and also how angry the Saskatchewan Small Claims Court people get when you have to cancel a trial.

he probably disappeared with the help of his turkish cousin, keyser soze.