You and me and the PRC

When I left Canada, I had no particular intention of visiting China on this trip, though it's been a vague interest since I took that intro Mandarin course in high school. Things cropped up to the point where I decided I really had to go.

For one, I now have people to visit. Nicki is improving her Mandarin in Beijing this month, and I have a cousin teaching English in Shanghai. Secondly, it turns out it is really easy to go to China from Hong Kong (this is not really any kind of secret, but hey, what do I know). And finally, I have had it recommended by people I've met along the way. So hey, I'm sold and I'm here.

Nicki has been kind enough to extend an offer of sneaking into her dorm room (it has two beds, but she's renting the whole thing) at the university where she is studying. All I had to do was get there from the airport.

If you are looking for a big country where your English won't get you far, China is a good one to try. After shrugging off expensive taxi offers at the airport (of course this was only interpreted as driving a hard bargain, but I exasperated them enough eventually), I gestured and drew on my dozen-word Mandarin vocabulary at the outdoor kiosks to secure a spot on an airport shuttle to (probably) downtown Beijing.

In the end, my life was made simple by a very friendly gentleman who happened to be in the seat beside me on the bus. Apart from speaking pretty decent English, he let me call a worried Nicki ("Where are you?" "On a bus . . . " "WHAT?!?") and wrote down the name of the place in Chinese characters for use in a taxi. Even this wasn't too necessary as he went the extra nice step and talked to a cab driver for me. In the end, I made it to the university for a fraction of the price of an airport cab (and really, Thailand has made me tired of bargaining, in particular for transportation - I just want a price up front).

Posted at 05:42 AM
Comments
Kowloon

Hong Kong is crazy. It's a big city, lots of people, and with none of the usual sign restrictions you might be used to; signs are hanging over you anywhere in the road, blocking each other, fighting to be seen. Most of them are neon, so this goes on all through the night.

I settled in at a guesthouse in Mirador Arcade, one of the big building complexes on the south end of Nathan Road (the Golden Mile, though I didn't hear anybody call it that). You may also have heard of Chungking Mansion; Nicki had, in terms of "don't walk around there at night". Mirador is basically next door.

Giddy with the excitement of a new country, and wanting some quieter space to myself on accout of a blossoming ear infection, I got a private room with my own bathroom (well, shower, no bath), where all the fixtures fit into, I'm not kidding, a square metre of floor space (I mean wall to wall, not excluding the toilet for example).

Wandering around, especially in this area, is an exercise is dodging touts and other solicitations. These are only a select few types. The dominant group would be those trying to get you into a tailors shop, of which there are a very many. Around Chungking at around dinnertime, you may be swarmed with brochures and membership cards to any number of Indian restaurants. At any time of day, there are men who will quietly (not too quietly, though) ask if you are interested in a watch; some say "watch?", some "Rolex?" and some the more straightforward "fake watch?". You will, so I am told by the vendors themselves, be assured of a good price on any of these items. My strategy next time will be either to wear a shirt proclaiming "NO TAILOR. NO WATCH. NO FOOD. Thank you." or the more provocative "I have SARS."

Last, but surely not least, as I learned on the first night (I forgot to change my clock from Thailand, so I was unknowingly out after 11pm looking for a snack), are a number of ladies of the evening, dressed for the most part in what I thought were pretty normal clothing (as opposed to, say, Their North American counterparts in such a section of town), which is what threw me off at first (my train of thought being, hey, that was a friendly person saying hi, oh hey, another one . . . and they are women . . . standing around . . . and it's kind of late . . . oh, ok, got it). Hey, give me a break, I'd had an early start in Bangkok that morning. Somehow I found my way to a food stand that sold me a skewer of tasty friend squid, a filling dinner on my reduced appetite.

Speaking of poor judgement, I was sucked in by one of the tailor shops. I had some pretty decent clothes made at reasonable (though I suspect, by HK standards, somewhat extortionate) prices. I blame my aquiescence at least in part on the drugs I was taking; I'd found a doctor by now for my feels-like-the-side-of-my-face-is-exploding ear infection.

I spent a lot of time in bed during the week, feeling a bit out of it courtesy of the pain killers. I certainly settled in early for the night, but my closet/room did have a tv. I caught up a bit on news and saw a particularly chilling British documentary on North Korea.

The tasks I did accomplish involved my impending trip to China. The plan was to get a visa and some kind of transportation up North, and that's just what I did. The PRC was kind enough to grant me a 30-day visa after a couple of days of taking care of my passport for me, and Nicki's friendly travel agent was able to dig up a pretty cheap flight to Beijing for the weekend.

Here I am, after one night in Bangkok. We arrived at 6am yesterday morning, and after a brief nap at one grungier guest house, Bryce and I moved into more respectable digs elsewhere on Khao San Road.

I have two more nights here, and them fly out to Hong Kong. Once the Chinese government lets me in, the plan is to head up to Beijing to check in on Nicki and see how her Mandarin is coming along.

Incidentally, this is what you might have opened your door to yesterday if you lived in Halifax: 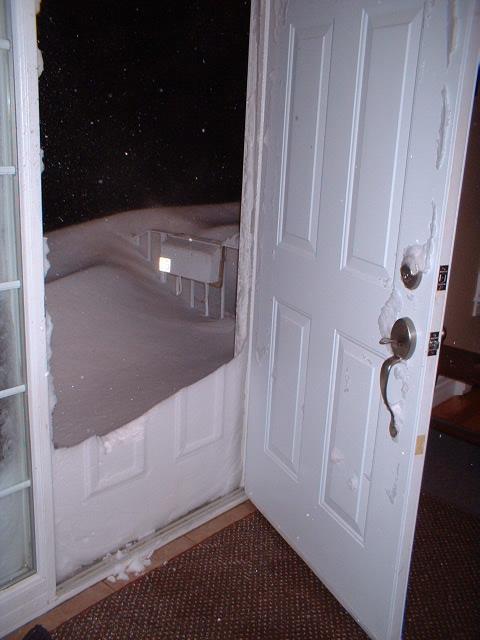 I'm not sure what the temperature is here, but the air con system in my room claims that it is a chilly 25C inside.

Well, we are heading up the island for the next week or so, including a trip out to Bottle Beach. I think I've written back pretty much everybody who sent along birthday greetings, so I won't miss the internet time too much. I've also caught up on quite a few of the latest seanbaby ramblings (Bryce now celebrates his compleat works).

We've decided at this point that we will be departing illegally from Thailand when we go. They have a system where you pay a fine if your visa expires, which is cheaper than renewing it if you only go over by a few days. I'm just hoping the paperwork will be manageable so that I don't miss my flight to Hong Kong on the 23rd.

Posted at 10:53 AM
Comments
Full Moon

The full moon party was a great time. The same beach where Bryce and I have already spent several evenings visiting the bars was almost a whole new place. The huge moon glistening on the bay was a nice effect, but of course the main difference would be the thousands of people crowding the beach.

Bryce has pictures . . . basically we walked around, met people, drank, sat around, some dancing. It's a party, what do you expect. We stayed as long as possible until Bryce crapped out around 5am (which I only write since he seems to need to make a big deal about such things).

Posted at 10:43 AM
Comments
Koh Phangan

After the birthday festivities in Phuket and snorkeling tour on the islands, Bryce and I are back on the island of Phangan. We've been taking it easy and catching up with people back home a bit. I've gotten to a lot of email in the last few days, and even written up some of my notes from December.

I brought two bottles of French wine with me to Thailand, bought on my last day in Paris. I finally had the second one, the last I will have for some time, on our camping trip to the Similan Islands. It was a little warm, nobody else wanted any, but I finished the bottle in relatively short order. I don't know what sort of long term effects I will feel from cutting off my half-bottle-or-more-a-day routine, but my guess is they will be beneficial. Sigh.

Tonight will be my first full moon party; Koh Phangan is famous for them.

back-dating logs is for chumps. chump.

I don't know about cutting back that half bottle a day deal. I mean, I ended up getting sick again, and having crazy ass dry skin....mind you, it could just be the craptacular Ontario winter.

Ben: It makes for a much easier way of sorting things out. Sorry for all that extra clicking work you have to do.

Bri: Good point. Get to the liquor store immediately.

I hope you drank more then your brother Bri, Warren is proving very fruity in the drinking department :) Maybe we should get your sister out here to teach him how to drink.